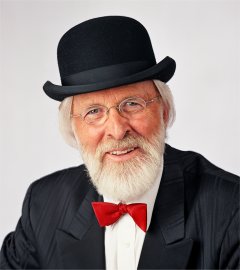 Contact us:
You are welcome contact us for all publishing and licensing matters, and of course all your other questions.
E-mail: info@vader-abraham.com / Phone..: +31 (0)76-5652120 (Dutch office hours)

Pierre Kartner alias Father Abraham, the performer, composer, lyricist, producer and talentscout was born in a small town in the Netherlands by the name of Elst. The first sign of his artistic ambitions showed at the age of eight, when he was chosen no. 1 in a radio-songcontest. His first instrument was the guitar. Soon he played also fluently the piano and bassfidle. His favorite is however still the guitar.

As a composer and lyricist Pierre has created numerous golden hitrecords for many Dutch and internationally known top artists such as Peter Alexander (Germany) and Nana Mouskouri, Joe Dassin, Mireille Mathieu (France), The Fureys (Ireland), Engelbert Humper-Dinck (UK), Audrey Landers (USA), Andre Rieu (Netherlands), Ireen Sheer (Germany), Demis Roussos (Greece) and many others. He has the ability to link up catching melodies with subjects in lyrics, liked by everyone of any age.


Red rose cafe
However the masterpiece he wrote and composed back in the 70’s is the song called “Het kleine cafe aan de haven” (in English: The red rose cafe, in French: Le café des trois colombes, in the German language: Die Kleine Kneipe). Meanwhile this song has been covered by many top artists around the globe. Currently more then 250 covers and counting.

Performer, talent scout
On stage, citizen Pierre Kartner changes into a performing artist of certain age, called Father Abraham. Wearing owl-like spectacles and a bowler, singing songs about daily life with a warm and tender voice. Working as talentscout in his home country, he discovered and trained many young promising artists to become top stars and all of them had their records rewarded in gold.


Smurfsong
The success of the "Smurfsong", written, composed and performed by himself and seven weeks a number one hit in the Dutch charts, was the beginning of a Smurf-record craze that soon was to sweep the entire world (more then 25 million copies sold worldwide) reaching number one positions in many countries around the globe.

This shows the true evi­dence of his capacity to reach people worldwide, regardless of their age, tongue or social background. In the role as composer/author/producer Pierre received over 128 gold and platinum records.

Film music (Moomins)
Pierre is also involved in writing film music (underscore). Apart from being responsible for all the Moomin songs worldwide (The Moomins is a stop motion animated children's television series based on the Tove Jansson's Moomin series of books and amongst others very populair in the scandinavian countries), he also wrote the underscore for the featurefilm. In Finland they are called “Muumi”, in Sweden “Mumin”, and in Holland “De Moomins”, to name a few. More then two million copies sold of the Moomin DVD series in Scandinavia with music written by Pierre! 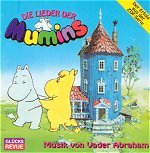